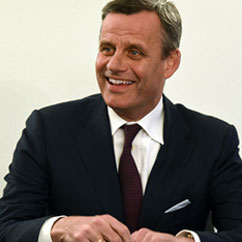 Apart from his legal career, Per Troen founded SapeGroup, the property and private equity group, in 1985 and has acted as the Chairman and CEO of the Group’s London management subsidiary, SapeCapital since 2005.

He also founded and is the first Chairman of Carte Blanche Family Office AG in Switzerland in 2014. CBFO is fully regulated by the Swiss financial authorities to provide financial introductory as well as asset management services.

Troen is also chairman of Future Systems and Nordlux Algae appointed in 2013, as well as GhostCom GmbH and Zenzari DWC LLC (Dubai), appointed in 2015. He previously founded Abbott, King & Troen as well as Corren Troen and has been an equity partner at the Danish law firm Plesner, Copenhagen and England as well as Osborne Clarke, also in the UK.

He was the founder in 1989 – and Chairman for 12 years- of The Danish UK Chamber of Commerce, Director for 8 years of the then listed Latchways PLCand has for the last 30 years been on the board of a number of businesses, organizations and charities in Denmark, Spain, France, Mena, USA, India and the U.K.

Chambers Global ranks Per as a Notable Corporate/M&A Practitioner in the UK and Denmark.

Per Troen lives in Kusnacht and is married to Sally with three children. His hobbies are history, politics, football, shooting, golf and skiing.

* Not admitted to the Swiss bar